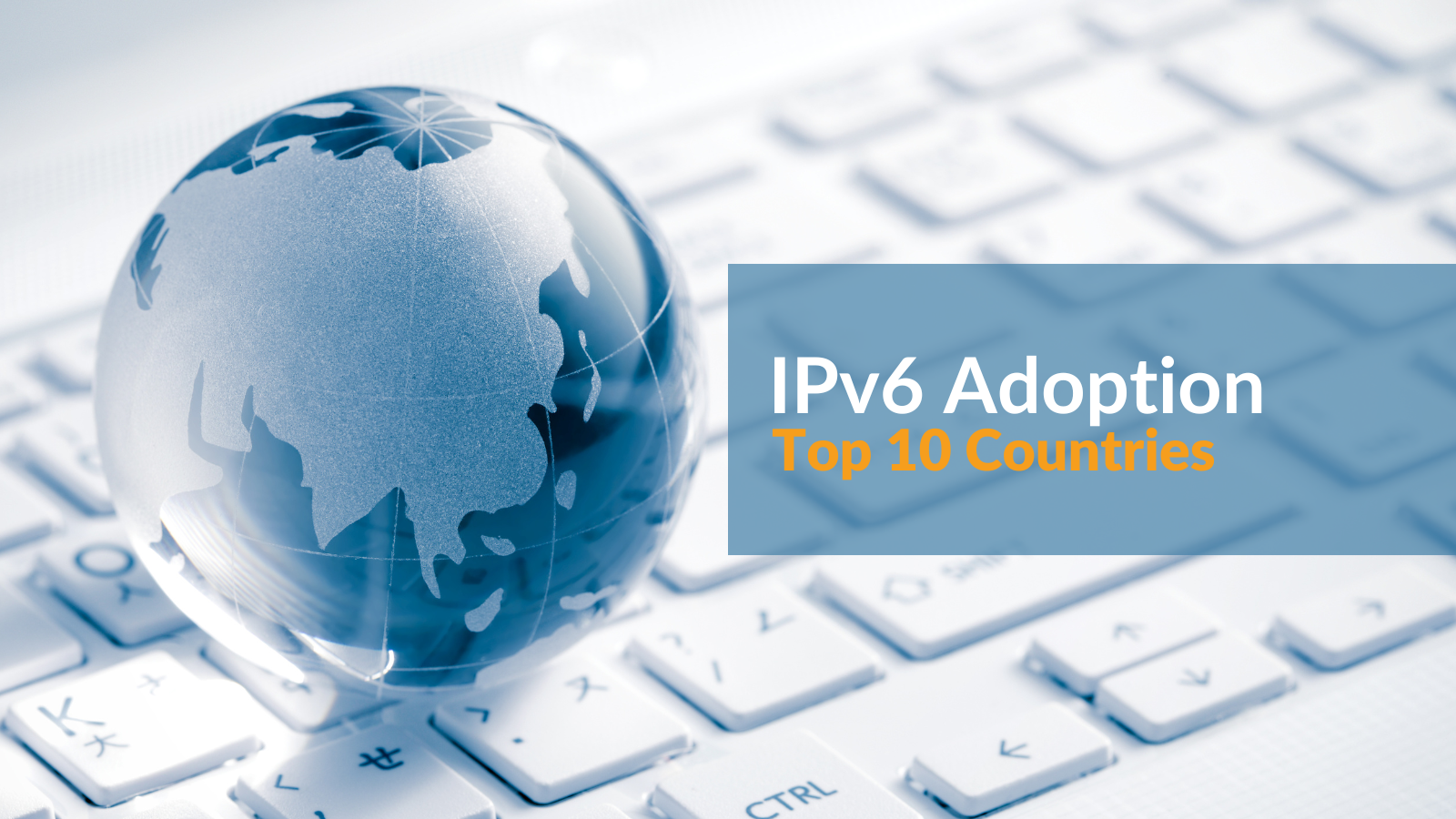 We have compiled a list of the top ten countries that have adopted IPv6 as of 2022. In this post, we’ll cover some highlights, metrics, and updates on where these top countries currently stand today. However, before we get into it, let’s first discuss why IPv6 is necessary.

Not Enough IP Addresses to go Around
In short, the world is running out of IP addresses. This is because the decades-old IP address format is too limited. For example, a 32-bit IPv4 address can only make 4.3 billion combinations; however, considering the 3 billion users on Facebook, not including devices, you can see how this can quickly become an issue. Millions and soon-to-be billions of smart TVs, refrigerators, cameras, lightbulbs, self-driving cars, and industrial devices need IP addresses, too, not to mention increasing numbers of users in developing nations. The solution to this IP address shortage is migrating to IPv6. This new internet standard protocol uses 128-bit addresses, which translates to 3.4×10^38 or 340 undecillion possible IPv6 addresses. With so many possible combinations, there will be enough so that every device on the planet can have its own. Conceivably the world will never run out again. If you’re trying to imagine how large this is, check out our previous video on The Truly Massive Scale of IPv6 Visualized to get a better idea.

How to Measure IPv6 Adoption
Now let’s look at which countries are out in front in their adoption of IPv6 but first, it is necessary to explain what adoption means and how it’s measured. IPv6 adoption is when internet service providers and fixed wire carriers give IPv6 addresses to their customers. IPv6 connectivity is measured using metrics calculated by looking at traffic flowing from offices, warehouses, and homes to places at the center of the internet, like the Akamai CDN (content distribution network). Akamai is an excellent source for global traffic, whereas a single ISP would not be, as they can only look at their user traffic. Google is also reliable because many people use its DNS servers and, of course, its search engine. Both metrics can tell what format the data is in since it contains the IP address from where the traffic comes from, in most but not all cases.

Adoption Today
So, where are we today? Akamai provides up-to-the-minute numbers. They show this ranking and what percentage of that traffic is IPv6. As mentioned above, they can determine this information by looking at packet-level TCP and UDP traffic. Here are the top 10 countries: 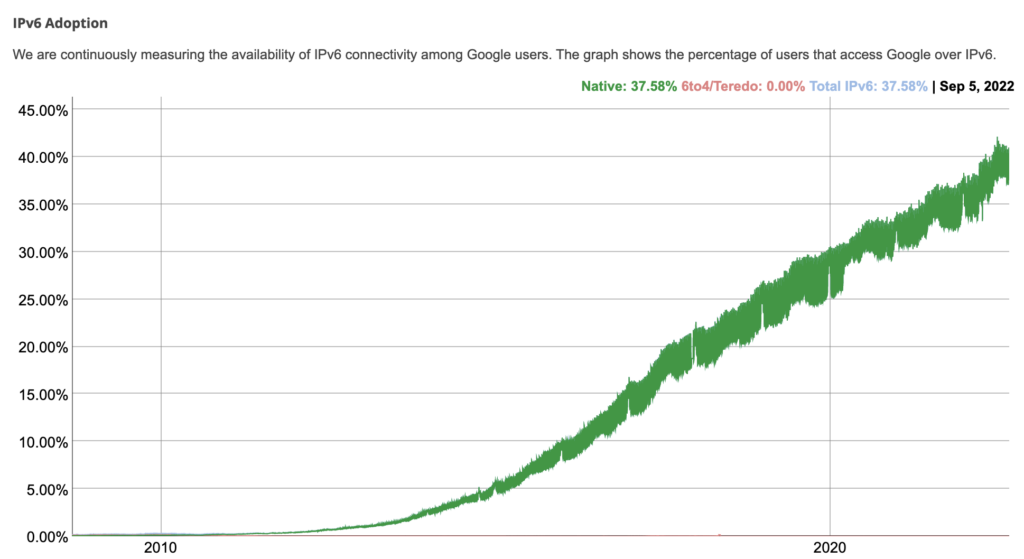 Adoption Rates by Country
Next, we look closely at some of the countries on this list and ask: What is making them move forward? How are fixed providers doing compared to wireless carriers? What are some challenges they have faced?

Bahrain
In 2016, this Gulf country organized training for ISPs, architects, and others to try to stress the importance and the benefits of IPv6. Bahrain’s regulator said, “The core objective of the IPv6 training is to allow the participants to recognize the importance of adopting this latest internet protocol in their networks, build technical capacities to accommodate the applications and services, and ensure the transition to the latest version within the coming years.”

They repeated this training the following year to drive home the point. The Samena organization of telecom providers spelled out the reasons for moving forward, “network operators are finding themselves running extremely low on unused IP addresses.” They warned that “this has the potential to restrict the ongoing growth of the Internet in profound ways.”

Belgium
Coming in at 51.2%, we have Belgium. In an interview with Network World on the reasoning behind their ongoing success, Eric Vyncke, co-chair of Belgium’s IPv6 Council, stated, “Except for the ‘incumbent’ ISP (Proximus ex-Belgacom, mainly xDSL), the other ones (mainly cable) were running short of IPv4 addresses.”

France
Arcep, the French telecom regulator, said that the leading ISPs Bouygues Telecom, Orange, and SFR had burned 93% to 98% of their IPv4 allotted addresses. This shortage would mean they would not be able to provide IP addresses for all their users if they were all connected to the internet simultaneously.

This scarcity highlights an important point, considering that not all users get an IP address from a collective pool available to everyone on demand, i.e., 4.3 billion. Blocks of addresses are provided to domain registrars and wired and wireless carriers. Some numbers are set aside for particular purposes.

As for IPv6, Arcep says Free and Orange are out in front, and Bouygues Telecom has switched entirely to IPv6 for mobile devices.

The USA
Lastly, we have the United States; due to its vast size, one approach to getting providers and users to move to IPv6 is by decree. For example, the US Department of State has said that all new systems deployed in their offices must be IPv6. This requirement would mean that the many contractors and vendors who do business with this government agency would have to change their existing software and hardware if they want to continue doing business with them. According to ARIN, the US government says 80% of their systems should be IPv6-only by 2025.

Final Thoughts
It is clear that with the whole planet getting wired and with the proliferation of smart devices, the world needs a more significant number of IP addresses than the 4.3 billion possible with IPv4. Some countries are fixing that by moving to IPv6, but not all. Some move faster than others because they run out of numbers quicker than the rest. Others see it as solving a potential problem, pushing aside obstacles that could hinder future growth. However, regardless of how fast they move, the internet will have to maintain a dual-stack, with network devices having two IP addresses for the potential future so that countries and providers that have fallen behind do not get completely cut off. As for now, we continue to see growth in IPv6 adoption, and we look forward to higher rates soon.

It doesn’t have to be challenging if you’re thinking about switching. With the right resources and careful planning, IPv6 migration and implementation can be smooth and easy. Check out our previous blog on the Six Steps to IPv6 (2022) to help you get started today.