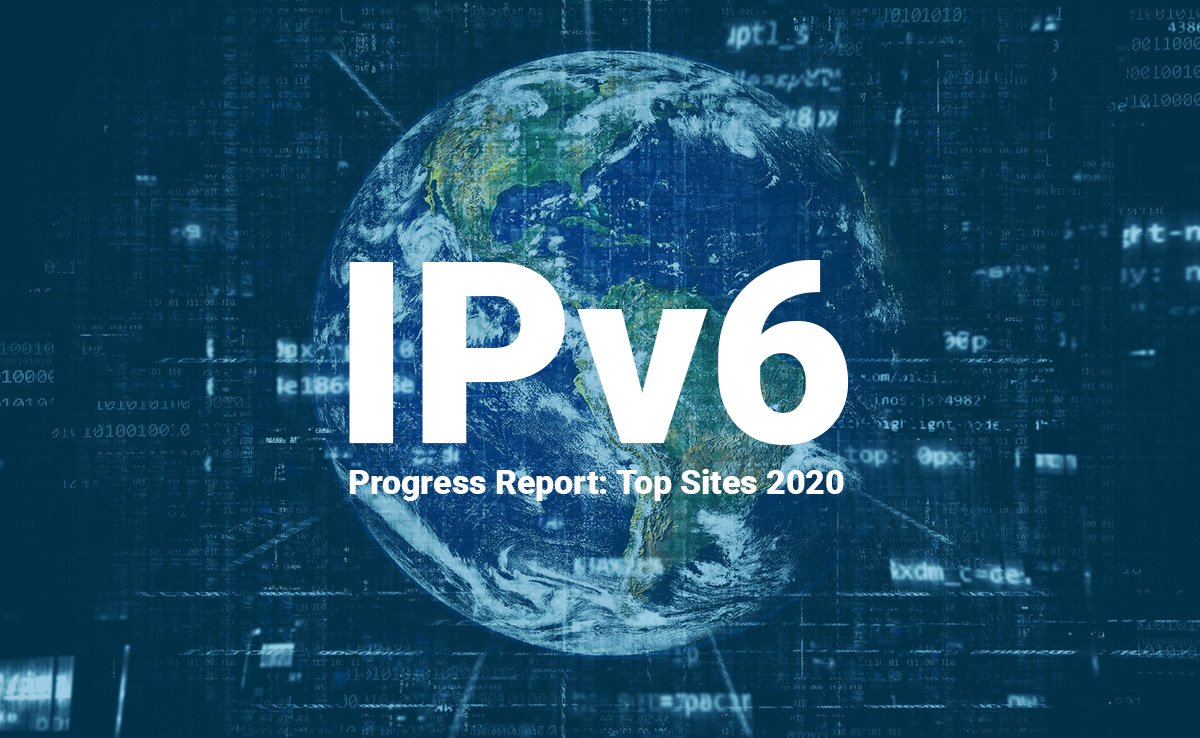 Due to the total exhaustion of IPv4 addresses around the world, IPv6 readiness is more crucial now than ever before. As connected devices continue to play a larger role in our lives and the Internet of Things experiences explosive growth – reaching 25 billion IoT devices by 2021 according to a recent forecast by Gartner – the reach of available IPv4 addresses will be stretched to its limit.

Note: This post was originally published in May of 2019. In the year since that publication, none of the sites here from the “red” column have added IPv6.

Even as CGNAT and dual-stack systems currently help to bridge the gap between IPv4 and IPv6, these are nonetheless temporary solutions as the world inevitably moves toward an IPv6-only Internet that runs more smoothly. With the transition to this successor protocol, we’ll see improvements in end-user experience online, traffic congestion, application specificity, security, and more. (For a primer on IPv4 and the transition to IPv6, check out our previous post here.) But how are we handling the transition today? One easy litmus test is to see what websites are IPv6-capable today? Who is leading the charge? Let’s take a look at the stats!

As the world moves toward higher rates of IPv6 adoption, we’re witnessing more and more major websites enabling support for IPv6. The table below shows the IPv6 capability status for the top 25 websites according to Alexa ranking. Each site has been checked for an IPv6 address DNS record (AAAA) via its primary domain and “www.”, as indicated in the table – and sites that do have an AAAA record are also checked for whether a web server answers at that name from an IPv6 source address.

*Site appears to have no IPv6 DNS server, which may prevent some IPv6-only users from reaching it. As you can see, some of the world’s biggest content providers like Google, YouTube, Facebook, and Netflix are now IPv6-capable. Other sites that top the list include Wikipedia, Yahoo, Instagram, Blogspot, LinkedIn, and Yandex. Back in June 2012, the Internet community started World IPv6 Launch in an effort to encourage companies to make the transition to IPv6. The early leaders pledging to permanently enable IPv6 on their websites beginning on launch day included Google, Facebook, Microsoft Bing, and Yahoo – and unsurprisingly, they continue to be at the forefront today. More companies have followed suit, however, and since 2012, global IPv6 traffic has grown more than 5000%. Based on the latest numbers, about 29% of Alexa Top 500 servers now support IPv6. (You can check out the data, updated daily, here.) Many sites have offered transparency regarding their plans toward IPv6 transition, such as Wikipedia with its WikiProject IPv6 Readiness – an effort to “prepare Wikipedia, and all its various user-created tools, for the continued deployment of the new IPv6 Internet addressing protocol.” For its part, Facebook transitioned to using 100% IPv6 addresses in all of its data centers in 2017, and is now “working on rolling out IPv6 to the rest of the infrastructure.” (LinkedIn and Microsoft have also stated they plan to turn off IPv4 within their networks.) Facebook even offers a dedicated IPv6 information page outlining their deployment and adoption of the new protocol as well as sharing data about the percentage of Facebook Internet traffic being handled through IPv6. Similarly, Google continues to publish data about the availability of IPv6 connectivity among Google users, with a continuously updated graph showing the percentage of users that access Google over IPv6. Their statistics page also shows the per-country IPv6 adoption rate around the world. Although most Internet users aren’t even aware of the widespread transition to IPv6 happening behind the scenes, the process will steadily continue as ISPs increasingly upgrade to the new standard and new tech devices are built IPv6-ready.

Progress in Countries Around the World

The Internet Society’s 2018 snapshot of IPv6 deployment notes that over 25% of all Internet-connected networks advertise IPv6 connectivity. According to Google, 49 countries delivered at least 5% of network traffic over IPv6 last year, and in 24 of those countries, IPv6 traffic exceeded 15%. Since that time, higher numbers are being reported and new countries are joining the ranks all the time. Vietnam in particular has made remarkable progress, going from less than 1% to 34% IPv6 capability in just the past three years. As reported by APNIC earlier this month, 2019 is the eleventh and final year of Vietnam’s National IPv6 Action Plan, which has been effective in boosting the country to “second place in terms of IPv6 capability in South East Asia, and fourth place in the Asia Pacific.” China is likewise ramping up IPv6 deployment, with the government issuing a plan in 2017 to encourage large-scale adoption of IPv6. The intention is for network and terminal devices to fully support IPv6 adoption throughout China by 2025, and if successful, the country will then have the largest number of IPv6 users in the world. Gabon and Zimbabwe lead IPv6 adoption in Africa, with rates of 11.4% and 7.5% respectively. In Zimbabwe, the growth in recent years has much to do with Liquid Telecom, one of our customers, rolling out IPv6 implementation to users via an ISP subsidiary, ZOL. We also have to give a shoutout to Belgium, the first country to exceed 50% IPv6 adoption! Currently at 51.3% according to Google, the small European country owes its success to a number of factors, including collaboration among major ISPs, limiting the sharing of one IPv4 address to a maximum of 16 subscribers (placing major constraints on NAT/CGN), and the fact that members of the country’s IPv6 Council are in the same relatively young generation and enjoy supportive management.

IPv6 is truly the only practical solution to IPv4 address exhaustion. For network administrators who are just now getting ready to check out IPv6, we’ve covered the top 5 concerns you may have about IPv6 migration – including how to sell the migration internally to decision makers and other stakeholders. And if you’ve ever wondered how many of your website’s visitors utilize IPv6 – or other burning questions like whether the traffic comes from desktop or mobile, right down to the brand of mobile device, or which countries are bringing the most IPv6 traffic – now you can find out using a simple script we created plus data from Google Analytics. Check out our blog post showing how we did it and the results from our own website, plus grab our code for your own use from GitHub!