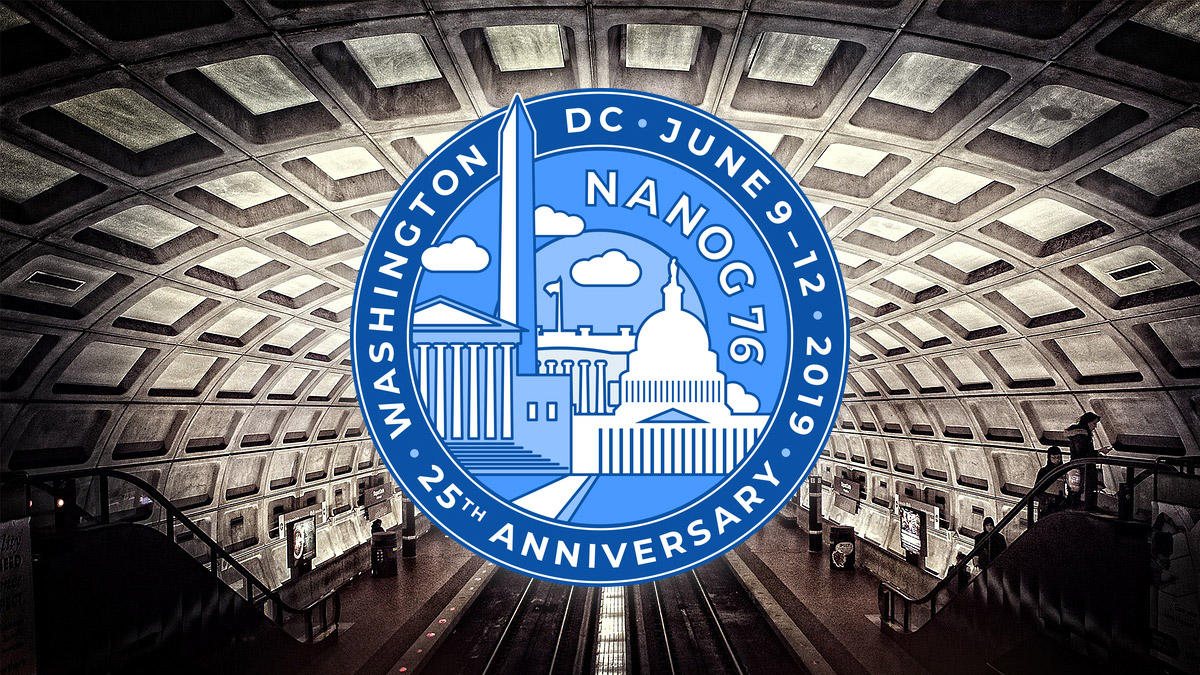 Another NANOG community-wide conference was held this month in Washington, DC, from June 10–12, 2019. Balmy weather ushered in the exciting hackathon that kicked off NANOG 76, and a bustling agenda of panels, presentations, talks and tutorial sessions followed.

This summer’s gathering of the North American Network Operators’ Group (NANOG) brought together over 900 network engineers, developers, industry veterans and entrepreneurs for three days of learning, networking and sharing of ideas. With a new record number of attendees, the long-running event shows no signs of slowing down, but we noticed how things have gotten more formal since the early days.

After a few opening words from NANOG and host sponsor representatives on Monday morning, ARIN President and CEO John Curran jumpstarted the conference with an important call to action: namely, inviting members of the community to share their IPv6 deployment experiences for eventual publication in ARIN’s compendium of IPv6 case studies. We’re pleased to see this valuable resource continue to grow over time as more and more organizations share their stories.

The event continued with a series of over 30 presentations from industry experts. Here’s a roundup of the talks and sessions we liked:

Prisoner of IPv4 – Lee Howard, founder of Retevia, compared the decision to deploy IPv6 with the classic Prisoner’s Dilemma, where everyone’s strategy depends on what they think everyone else’s strategy is. In his presentation, he outlined the ways IPv6 can benefit businesses and delved into how to calculate the penalties and payoffs of adopting vs. ignoring IPv6 for content and carriers. (He also wrote a follow-up blog post titled “Why is IPv6 Faster?” which was recently published by ARIN.)

Internet Traffic 2009-2019 – Craig Labovitz, CTO of Nokia Deepfield, presented an in-depth retrospective on global Internet traffic of the past decade. Attendees were treated to a detailed examination of changes in traffic patterns, content delivery and Internet peering across more than 50 providers worldwide, plus how cloud, IoT and major changes to interconnection strategies are impacting networks in North America, Europe and Asia.

Exploring the New Wave of Subsea Cables to North America – Tim Stronge, Vice President of Research at TeleGeography, covered all the recent and upcoming subsea cables landing into North America and was then joined by industry experts for a panel discussion about technology changes, the demand driving new builds, and the shift to subsea cable ownership by large content providers.

Crossing the Technology Desert: Solving Rural and Tribal Broadband Access – Matt Rantanen of Arcadian Infracom, a heavily tattooed and striking figure at 6’6”, provided a sobering glimpse into the broadband gap experienced by many underserved rural and tribal communities in America. His presentation delved into the forces that are currently contributing to a changing climate in these areas and how content providers, carriers, and other partners can help fix this serious inequity.

DNSSEC: What It Is and What It Isn’t – Paul Ebersman of Neustar, who was employee number ten at UUNET and helped build AlterNET back in the day, gave a presentation on DNS hijacking, what it entails, and the importance of defending the integrity of your DNS as this type of hijacking has become a mainstream attack technique today. His session focused on DNSSEC as a valuable layer of defense while also covering other approaches organizations can take to boost security.

One thing we’ve noted recently is a trend where the NANOG conference has become more corporate – which means a bit less geek fun. But even as things change, much stays the same. As one attendee mused on Twitter, there were nonetheless “still lots of beards and nerds. Oddly comforting.” We can’t help but agree.

Just for fun, here are a few highlights from the #NANOG76 Twitter stream:

So many new + familiar faces at NANOG 76! Here are just a few of our favorite pics from the last community-wide gathering in DC — check out all of them on our flickr photostream ???? https://t.co/c6na96350S #WeAreNANOG pic.twitter.com/9ckjLHCa6f

NANOG 77 will take place in Austin, TX, this October and promises to be another great event!