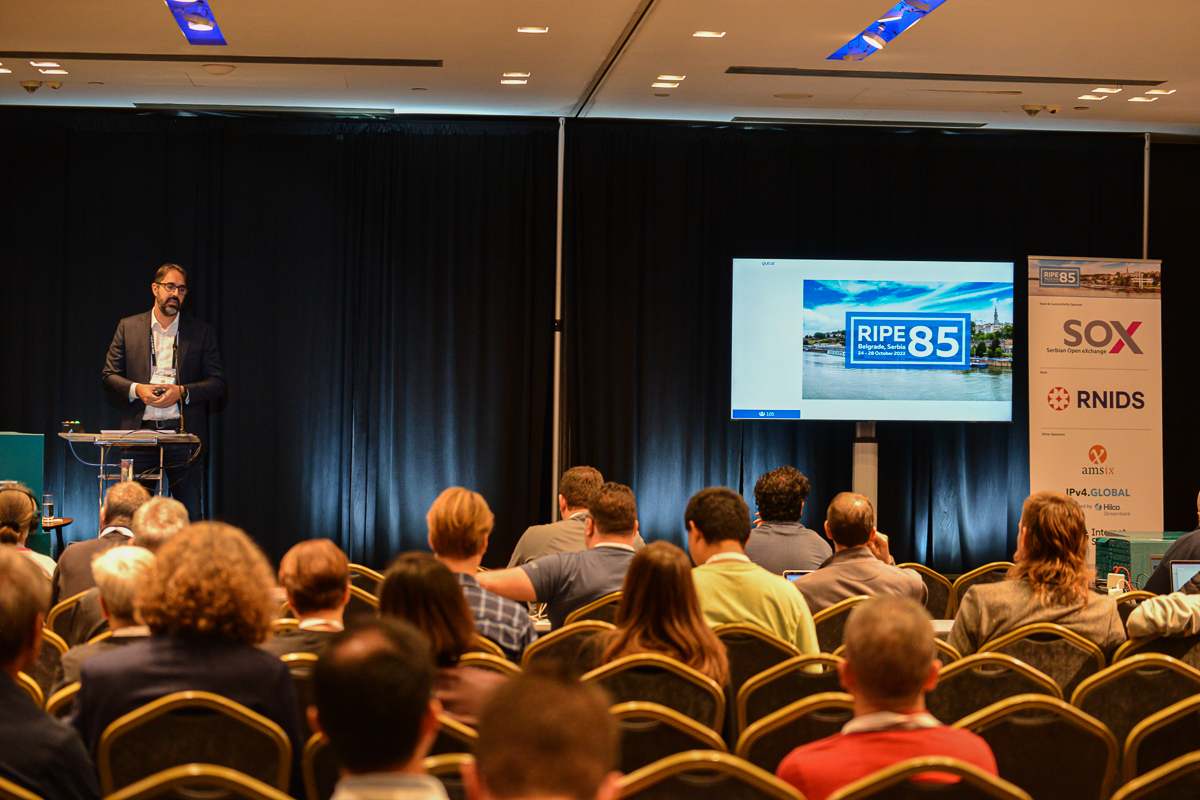 From October 24-28, 2022, RIPE 85 held its annual conference in Belgrade, Serbia. Mirjam Kühne, RIPE Chair, opened the conference and welcomed attendees. It was the second time the conference followed the hybrid model, with people attending both in-person and online. Of the more than 1,000 attendees from approximately 74 countries across the world, the conference welcomed more than 345 newcomers.

Over the course of the five-day conference, the itinerary included sessions that provided an update on BGP and RPKI Monitoring, IPv6 Policy Goals, Path Tracing, 400G Ethernet in the Field, and much more. The schedule was jam-packed with content that had the internet buzzing.

If DNS encryption is a favorite topic, like conference attendee @Farnazehbad, the session video and slides from Measuring Encrypted-DNS Censorship Using OONI Probe are worth a look. It was presented by Arturo Filastò as part of Thursday’s lineup. Since 2012, the OONI community has collected millions of network measurements from more than 200 countries, highlighting cases of internet censorship around the world.

And my favorite topic now a days: DNS Encryption blocking around the world: #ripe85 pic.twitter.com/kkIAECjWfc

Continuing the global conversation, unrest in Ukraine–and its impact on the digital community–has been front and center in the news, and also something that was addressed at RIPE 85. Specifically, on Thursday, Valerio Luconi presented the Impact of the First Months of War on Routing and Latency in Ukraine.

Then, on Friday, Svitlana Tkachenko presented The Internet in Ukraine: 200 Days of Resistance. She shared that in the first four months of the war, ¼ of all networks were destroyed. As recently as two weeks ago, the country was experiencing internet and mobile interruptions, using diesel generators, and scheduled blackouts for 4-12 hours each day.

This group used the power of social media to show solidarity for Ukraine during the conference:

One major benefit of the conference–whether someone attended in person, virtually, or not at all–is the amount of resources available online after the fact, as this individual noted regarding his experience in the DNS Working Group:

If you missed @ripencc‘s meeting of the #DNS working group at #RIPE85, you can watch it here and download the slides: https://t.co/2x6KfmLsBa pic.twitter.com/APykHRswY2

As all good things must come to an end, one attendee summed up his first experience back since 2019 (and the overall benefits of attending RIPE 85) perfectly:

If you missed @ripencc‘s meeting of the #DNS working group at #RIPE85, you can watch it here and download the slides: https://t.co/2x6KfmLsBa pic.twitter.com/APykHRswY2

And, if you ever hear someone joke that tech professionals don’t have a sense of humor, this conference proved otherwise. On the last day, the stenographer got the last laugh and caused a stir on social media:

And the stenographer had the last laugh ..

If the opportunity to network, gain new skills, or learn from the best and the brightest in the tech space makes you want to attend RIPE 86, it will be held in Rotterdam, Netherlands in May 2023.