A Moment in Internet History: The OSI 7-layer Burrito

Occasionally you’ll see references on the internet to network infrastructure and protocols described as a burrito. Specifically a 7-layer burrito. More specifically, the Taco Bell 7-Layer Burrito. How did this comparison get started? And, is it a valid comparison? (Spoiler alert: not so much).

Back in 1999 when much of the world was busy anticipating Y2K and not talking about Fight Club, a talented and sassy engineer by the name of Kent Dahlgren posted a rant to his blog titled “To Hell with the OSI 7 Layer Model”. Wait wait, let’s take a step back.

Go back to 1984, when much of the world was busy watching Karate Kid and not owning a computer. The International Organization for Standardization (ISO) published a document called ISO 7498: The Basic Reference Model for Open Systems Interconnection. It is commonly referred to as the Open Systems Interconnection Reference Model, or the OSI Reference Model. This was a conceptual model describing the 7 layers of a networked system, and its goal was to help standardize the network communication between various systems. It looked a little something like this:

After its initial publication the idea of the OSI Model spread across the IT world like refried beans on a soft flour tortilla. It was taught to undergraduate network engineers around the world. Marketing departments generated graphical assets showing how their products fit within the 7-layer model. It became, as it was intended, a standard conceptual model.

Now jump to 1999. Britney Spears is at the peak of her career, and Kent Dahlgren posts a rant to his blog comparing the OSI Reference Model to Taco Bell’s 7-layer burrito. You can see the original post here on the Wayback Machine (warning: possibly offensive and/or NSFW). He compared each layer of the burrito to a corresponding layer of the OSI model. He was tired of seeing references to the OSI Model and considered it largely out of touch with reality. The post was picked up on Slashdot, and the rest is history. 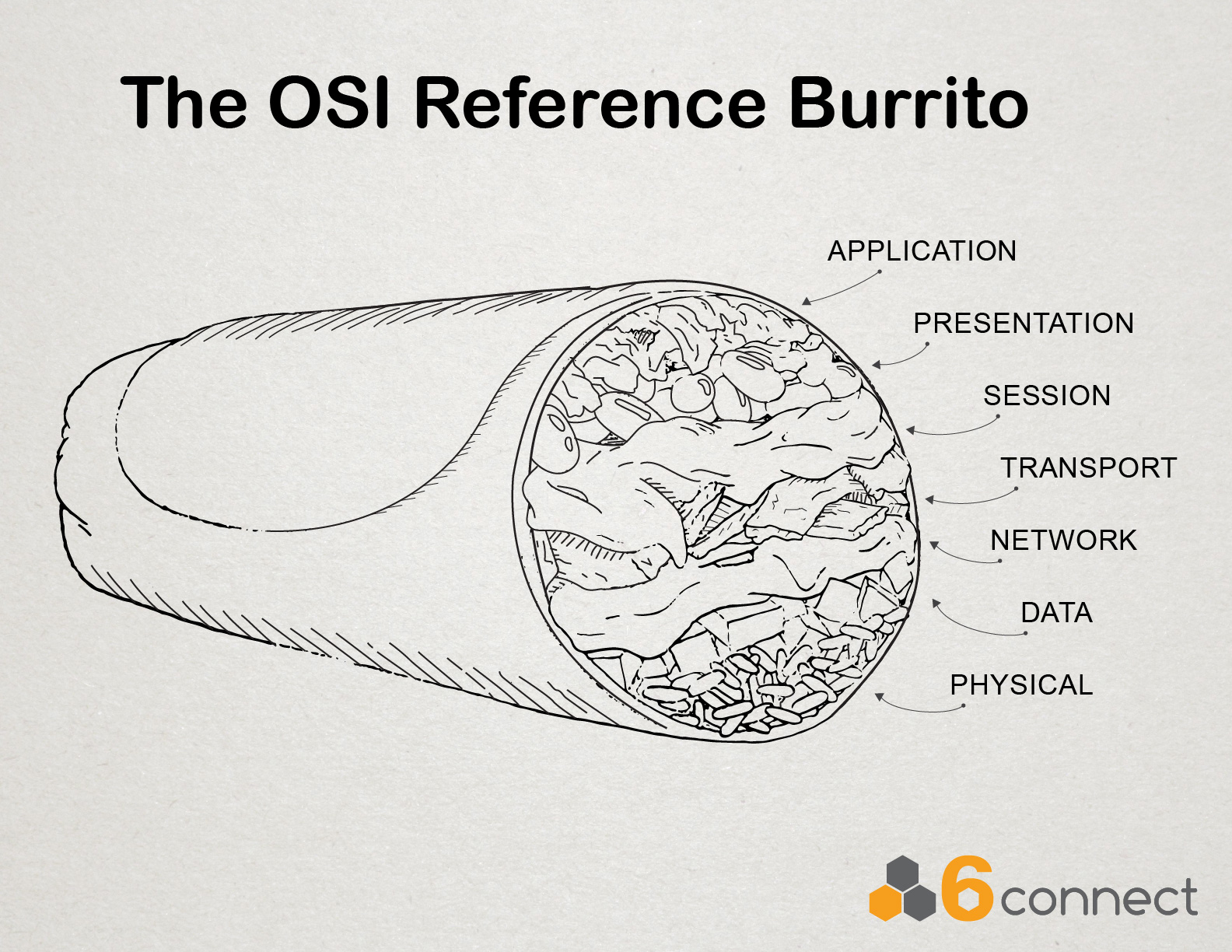 But what about the tortilla?!

There has been much debate over whether it’s accurate to compare the OSI Model to a 7-layer burrito. One topic that is often brought up is – what does the tortilla represent? It has been said that the tortilla represents the room in which the physical network layer resides, or that it is perhaps the time-space continuum itself. We would suggest that it is the high-fiber optic medium through which the other seven layers are transported. One thing is clear – I’m hungry now.
We’ll leave you with this:

* Note: This article is not intended to serve as dietary advice. Consult your doctor before eating 7-layer burritos.