The Consumer Electronics Show (CES) brought together more than 170,000 attendees in Las Vegas last week. Over 3,600 presenters exhibited gadgets, software, services and innovations that they believe will take off in a major way in 2016. As in years past, there were smart cars, TVs, drones and plenty of electronics demos. However, 2016 seemed to be the “year of VR” with hundreds of virtual reality demos – and of course, the Internet of Things (now dubbed by some as The Internet of Everything).

Some new advanced robots also made their debut this year. For example, Mother is a peanut-shaped robotic sensor hub that watches over you and your family. It measures how well you brush your teeth, it knows how much you drink and it watches you when you sleep. Creepy? Some say yes.

In terms of IPv6, the main panel at CES this year that focused on the Internet’s evolution to IPv6 was titled “Your Customers are on the New Internet. Are You?”. The panel was moderated by CTA’s Brian Malkwalter and featured experts including John Curran from the American Registry for Internet Numbers (ARIN), Paul Saab from Facebook, John Brzozowski from Comcast and Samir Vaidya from Verizon Wireless. The room quickly filled up and it became standing room only, with plenty of insights by the experts.

#IPv6 is no longer a “feature.” It’s a requirement to reach your customers on the New Internet! #get6atCES pic.twitter.com/JVMnPSxyol

“If you don’t go to IPv6 your competitors will” John Curran from @TeamARIN at today’s panel. #get6atces pic.twitter.com/kV4QRcEy4x

IPv6 is becoming impossible to ignore. Recently it celebrated its 20th birthday. The past four years, IPv6 deployment increased by a factor 2.5 each year: from 0.4 percent by the end of 2011 to 1 percent in late 2012, 2.5 percent at the end of 2013, and 6 percent a year ago. We’re now up to a 10 percent adoption rate and this is only going to continue to grow. The time is now to migrate to IPv6. 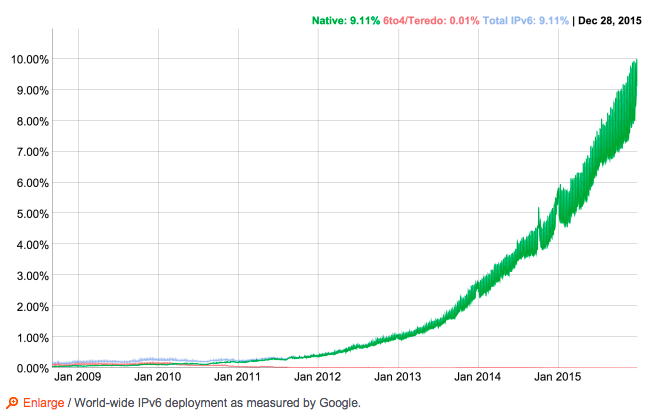