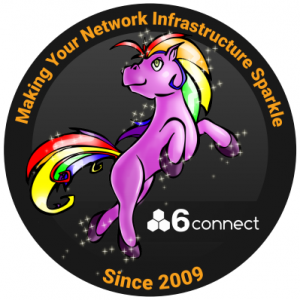 Last Friday and Saturday, we attended DevOps Day Silicon Valley, an annual conference for anyone involved or interested in the DevOps space with a mix of keynote sessions and open spaces. 6connect’s COO and co-founder, Pete Sclafani, spoke on an Ignite session on Friday about IPv6.

His presentation was titled, “How I Learned to Stop Worrying and Love IPv6”. He broke it down into four phases:

IPv6 can be a big shift, so pick your battles. Identify the high priority areas that IPv6 will affect, says our COO. #dodsv16

Another highlight from day one was a presentation by two Canadian university students on how to onboard entry level talent into a DevOps culture. The students had each had several internships in the DevOps space and surveyed their peers to deliver key takeaways for hiring managers. At the end of their presentation, they mentioned that they were each looking for a job. We wish the best of luck to them!

The detailed survey response for our talk “How to on-board entry level talent to a DevOps culture” @devopsdayssv https://t.co/RoI68SxpXg

Later in the day was Gail Ferreira’s presentation, “At the Intersection of Happy and Healthy: DevOps Meets IoT”. She included some compelling statistics about the Internet of Things:

She also talked about how IoT can enhance a DevOps culture.

How can #IoT enhance a DevOps culture? @DrGail shares her insights at #dodsv16pic.twitter.com/rjm7TwVuRl

An additional highlight on Saturday was Ramin Khatibi’s presentation, “How I Learned to Change My Mind and Became a Better Engineer”. His perspective on challenging norms and increasing self awareness to improve engineering skills was compelling and worth catching on video if you weren’t able to see it person. (link)

DevOps Day was another fantastic event. Thank you to the organizers!