Last week marked the four year anniversary since the World IPv6 Launch on June 6, 2012. Since then, we have seen incredible progress in IPv6 deployment around the globe.

Countries including Finland, The Netherlands, Brazil, Malaysia, Canada, and the UK have all made substantial strides in IPv6 deployment showing the global nature of the effort. In fact, Finland planned their own “National IPv6 Launch Day” for June of 2015. It was patterned after 2012’s World IPv6 Launch but targeted at service providers and content providers in Finland. The Finnish network DNA Oy started their deployment and saw results quickly. 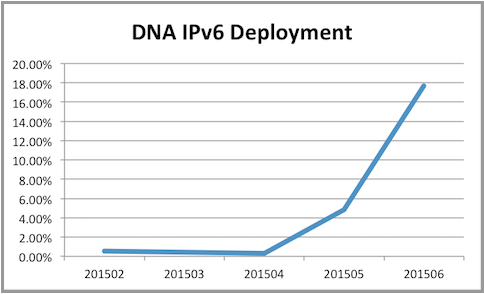 Additionally, the percentage of users accessing Google services over IPv6 exceeded 12% earlier this month – compared to less than 1% four years ago. Similarly the percentage of the Alexa Top 1000 websites that are reachable using IPv6 is now close to 20%. 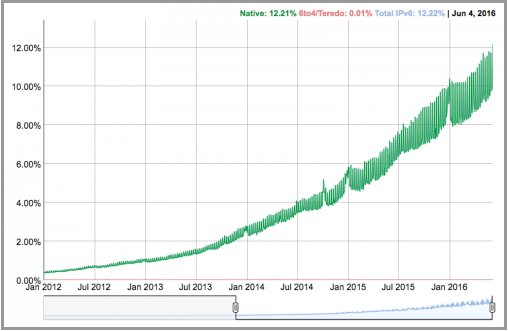 According to Erik Nygren, some of the greatest IPv6 deployments are now in cellular networks. If you have a recent Android phone on one of the top four US mobile networks (AT&T Wireless, Sprint, T-Mobile US, and Verizon Wireless), for example, then it’s likely you are already using IPv6 rather than IPv4 when connecting to the Internet.

We will continue to keep you updated on IPv6 deployments.